1996
Relocation to a larger company building at the Spaichingen site

1997
Extension of the company building

2001
Introduction of a production planning and control system 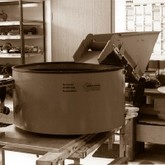